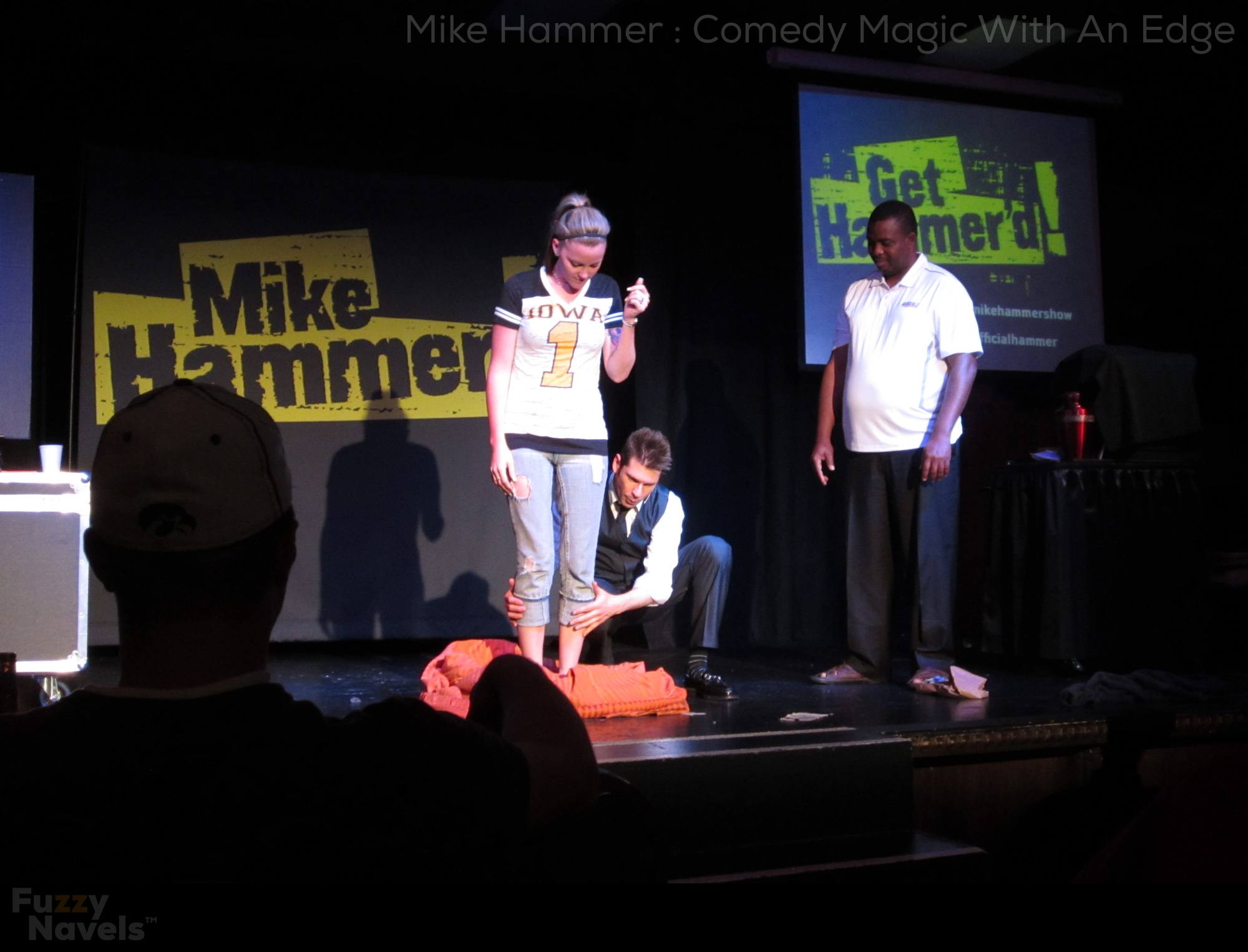 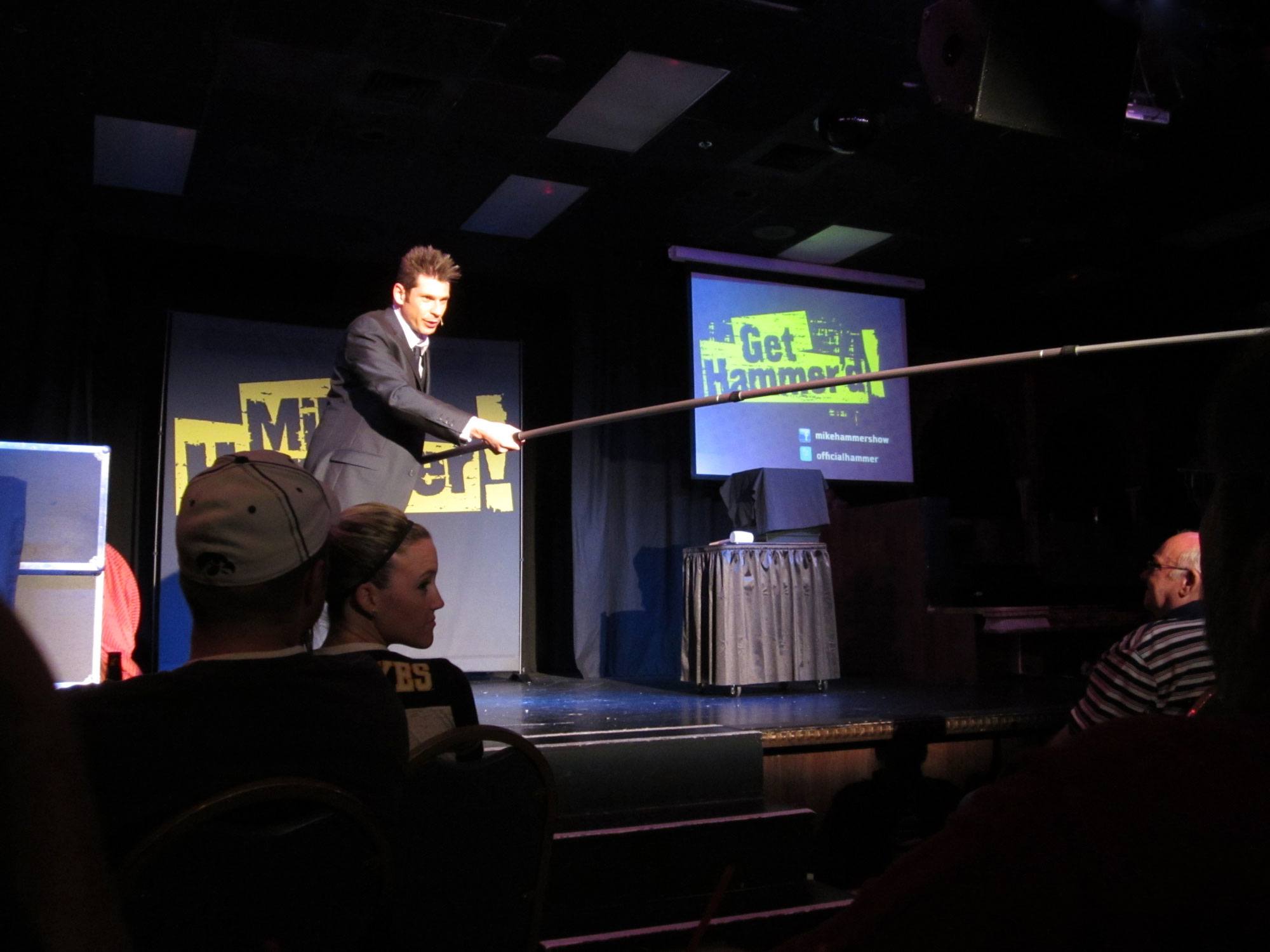 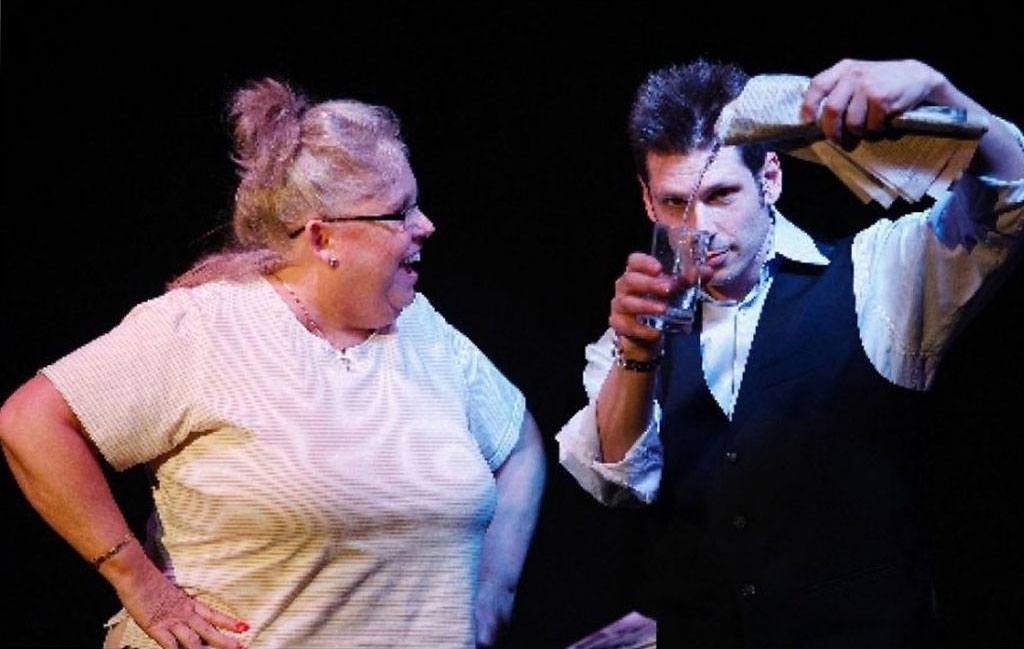 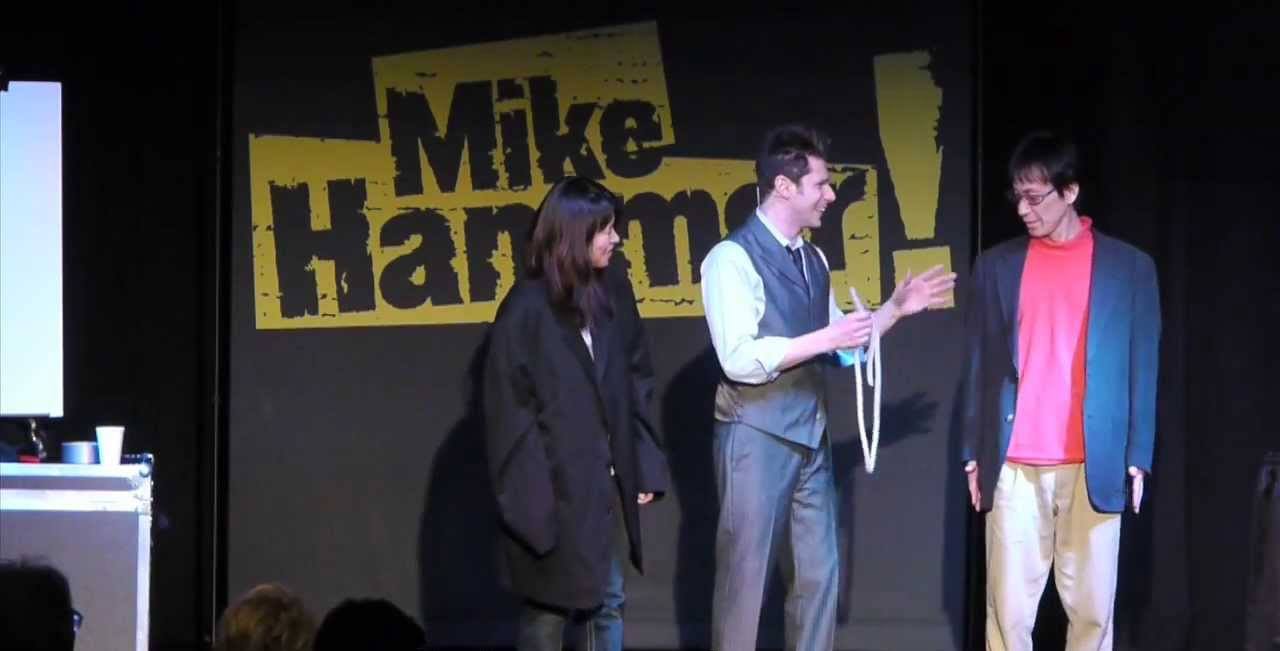 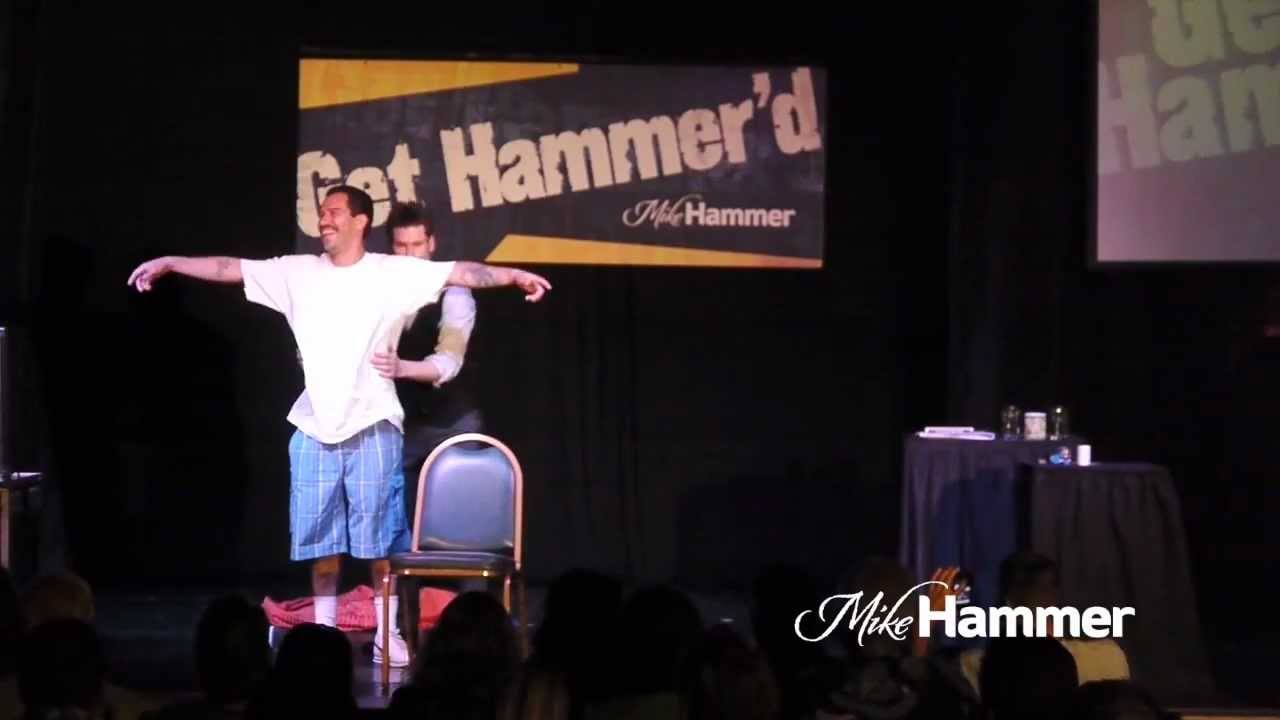 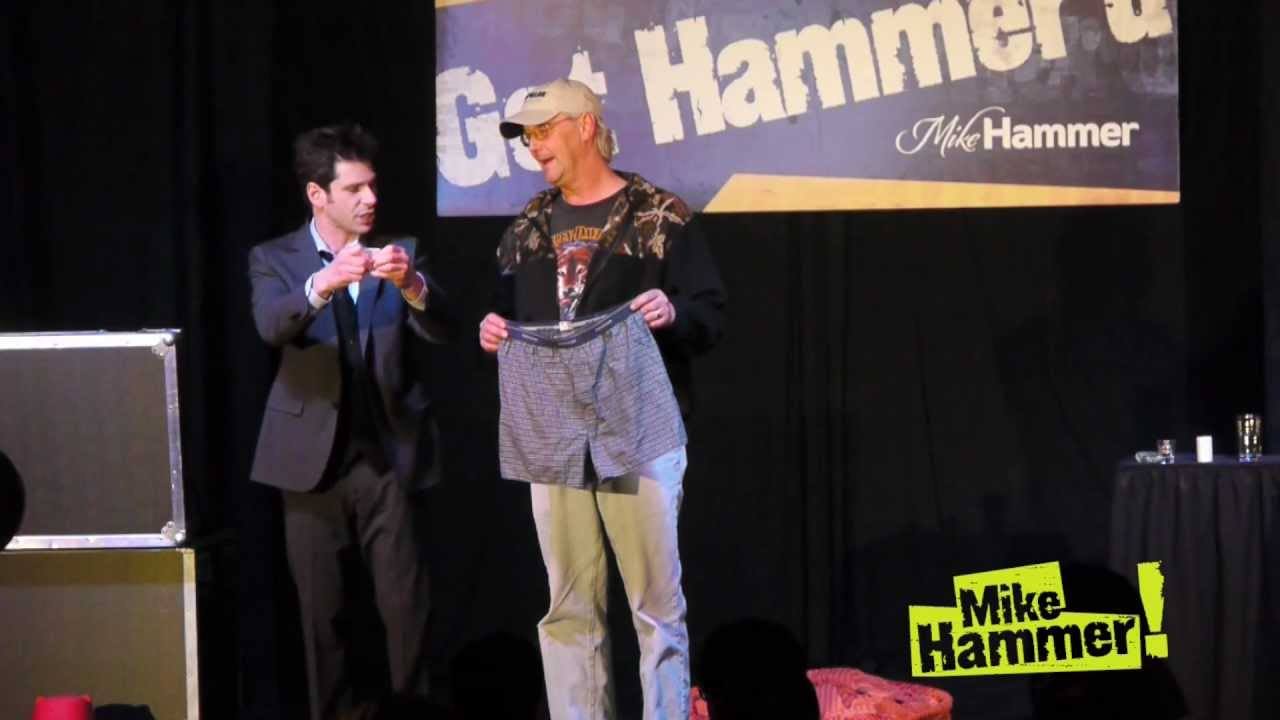 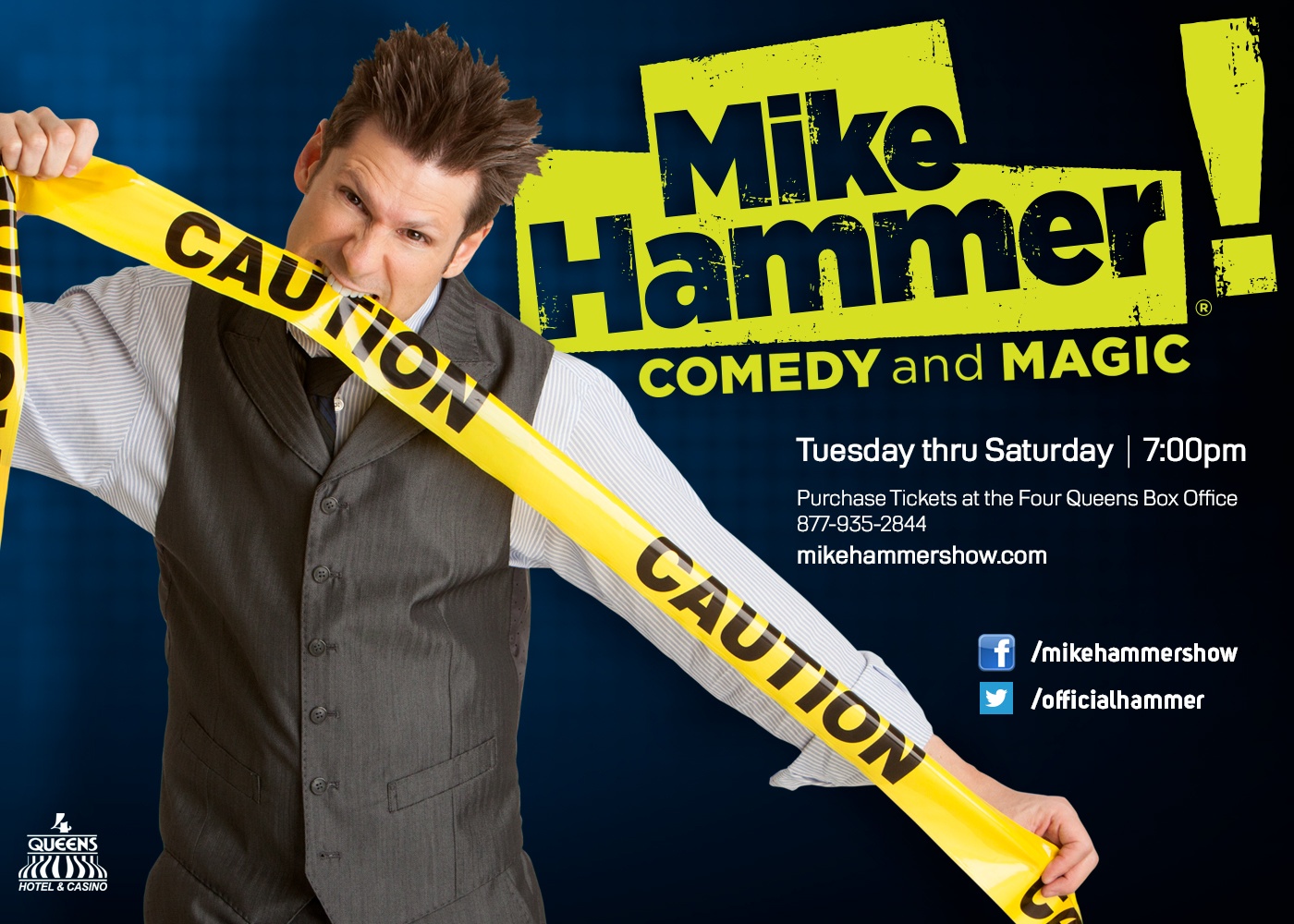 Dynamic and talented Mike Hammer is the best in all level of comedy and magic. Mike Hammer comedy magic show is extremely popular in the Sin City and from past two decades, he has been entertaining the crowd of Vegas with his mind blowing magic tricks, illusion, and mind reading. Mike is extremely talented and uses his skill efficiently to fascinate the audience. His hard-hitting show features illusion, mind reading, double-edged razor blade swallowing, gags, pranks and more. During the sixty minutes,  energy, stage presence and gesture of the Mike remain excellent.  Every show Mike incorporates not only the audience’s participation but audience integration to his Las Vegas Show, which makes every show different and unique. In the show, the way he interacts with the audience and uses his improvisation skill to create an illusion, it is really amazing. The best thing is that Mike remains professional and never disclose his next item in the show, he chooses the audience randomly; this dynamic keeps the show fresh and spontaneous.

Mike Hammer Comedy Magic Show is very popular in the Sin City. This is a highly entertaining show, where you can spend your time with friend, family, and kids. The 60 minutes event is one of the ideal family- friend shows performing on the strip and is sure to please even the skeptics of magical illusions.

Mike commence the show with a razor-sharp comedy. He comes to the stage and shares a joke then he interacts with the audience. The show of Mike evolves around his childhood memories. He calls a lady to the stage and then asks her to close her eyes and then he pulls her hand and suddenly she disappears from the stage. Other interesting illusions include, he comes with a bucket of water and calls few audiences to the stage then he throws a bucket of water over one of the audience and then he turned into small fish. In the past, Mike was famous for his charismatic magic skill, when he was been known to have tiger disappear to showgirls appearing while levitating in a glass box to putting a man in a toilet and having them both disappear.

Some of Mike’s signature illusion include intricate stage props that appear and disappear from the stage. Several magic tricks and mind reading show have been performed with beautiful and hot women. In the next 30 minutes, Mike performs his acts like mind reading, card tricks, smaller objects, things with money, coins, balls vanishing under cups, things of that nature.

The Four Queens Hotel is the perfect place for such type of show. This intimate theater with less than 300 seats has great sight views. The choreographed multimedia effects are provided by John Milton who designed sets for another famous event in Sin City. The sound system has all the right clarity when patrons are in suspense while the beautiful dancers perform.

Born and raised in Chicago, Mike was passionate for magic from childhood. After completing the primary education from Nicholas Senn High School, Mike starts his magic show with his childhood friend Adam. This was the time when Mike has seen one of the toughest time in his life. Definitely, magic was his passion but he encountered too many challenges and seen plenty of ups and down in his life. Once was a time in Las Vegas, when he had neither roof over his head, nor money in his pocket. But he did not give up and fight hard to survive in the City of Light. To make his life from good to better and from better to best he toiled hard and leave no stone unturned to become a successful star in Las Vegas.

Initially, he performed in the club, private parties, restaurants, resorts and then after a couple of years he has launched his own show in Vegas. In an interview with lasvegassun.com, he says, after six years of struggle I launched my show in the Sin City.

The live audience in the show, bite their tongue when Mike swallows double-edged razor blades. Mike is spontaneous talented and couple the magic trick with his unique, dry, witty and outrageous humor. When you combine magic and comedy with Mike Hammer’s energy and great comic timing, there’s not much more you ask for in a Las Vegas show.

Mike Hammer is well known for his charismatic gesture and unique stage presence. With over 25 years of private, corporate, and national experience under his belt including a Ring announcer for MMA fights in Vegas. Also, he was named in 2010 one of Esquire Magazine’s top “45 Under.

"Your Many Have seen other magicians, but Hammer gives it the extra dimension" – Las Vegas Review Journal

According to name hammer. He is not like that. Mike is a cool presenter. Comedy and magic best combination.

Mike Hammer is brilliant in all level. During the 75 minutes, he uses stage props brilliantly. The stage is equipped with cutting-edge technology and state-of-the-art sound system enhances the value of the production show.