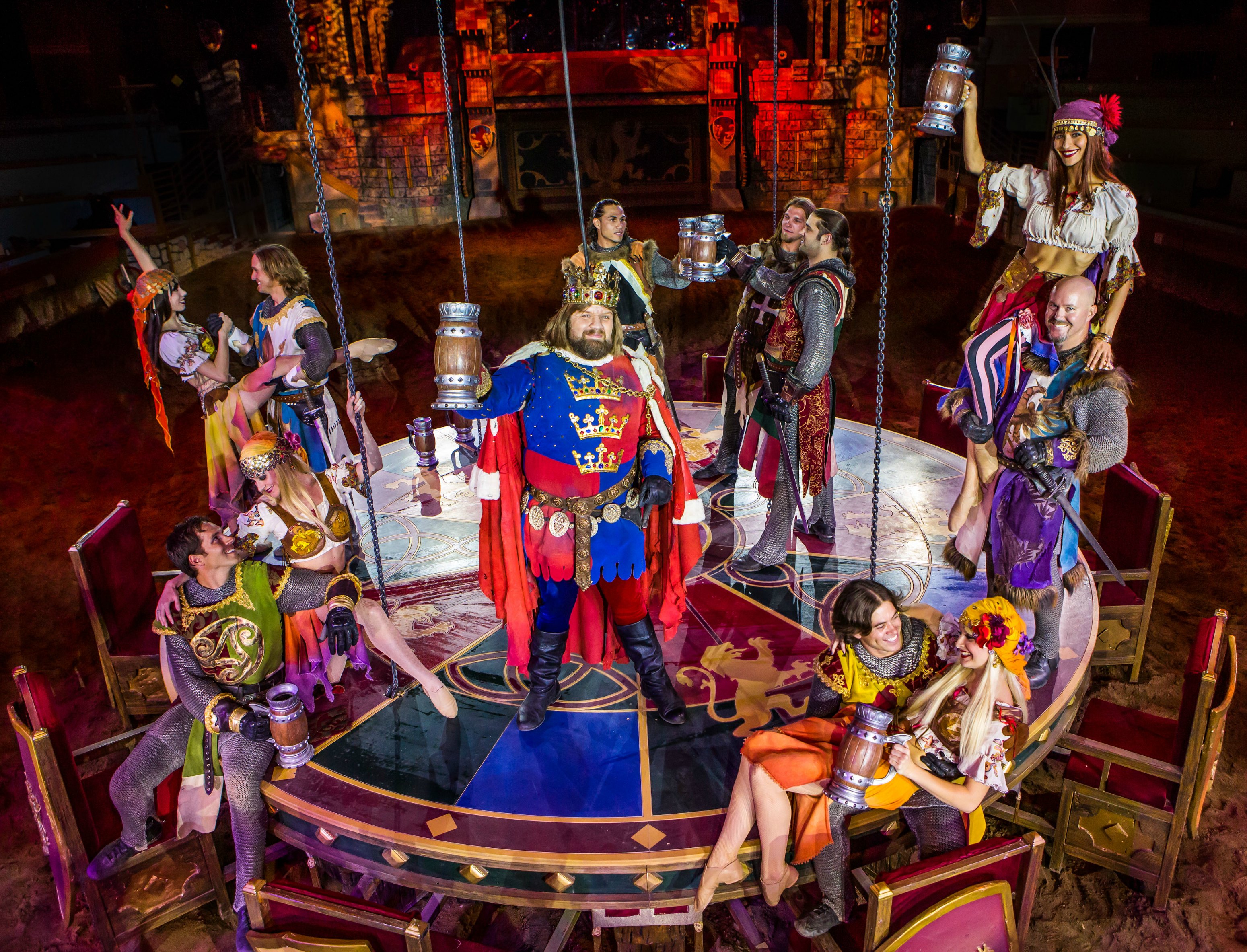 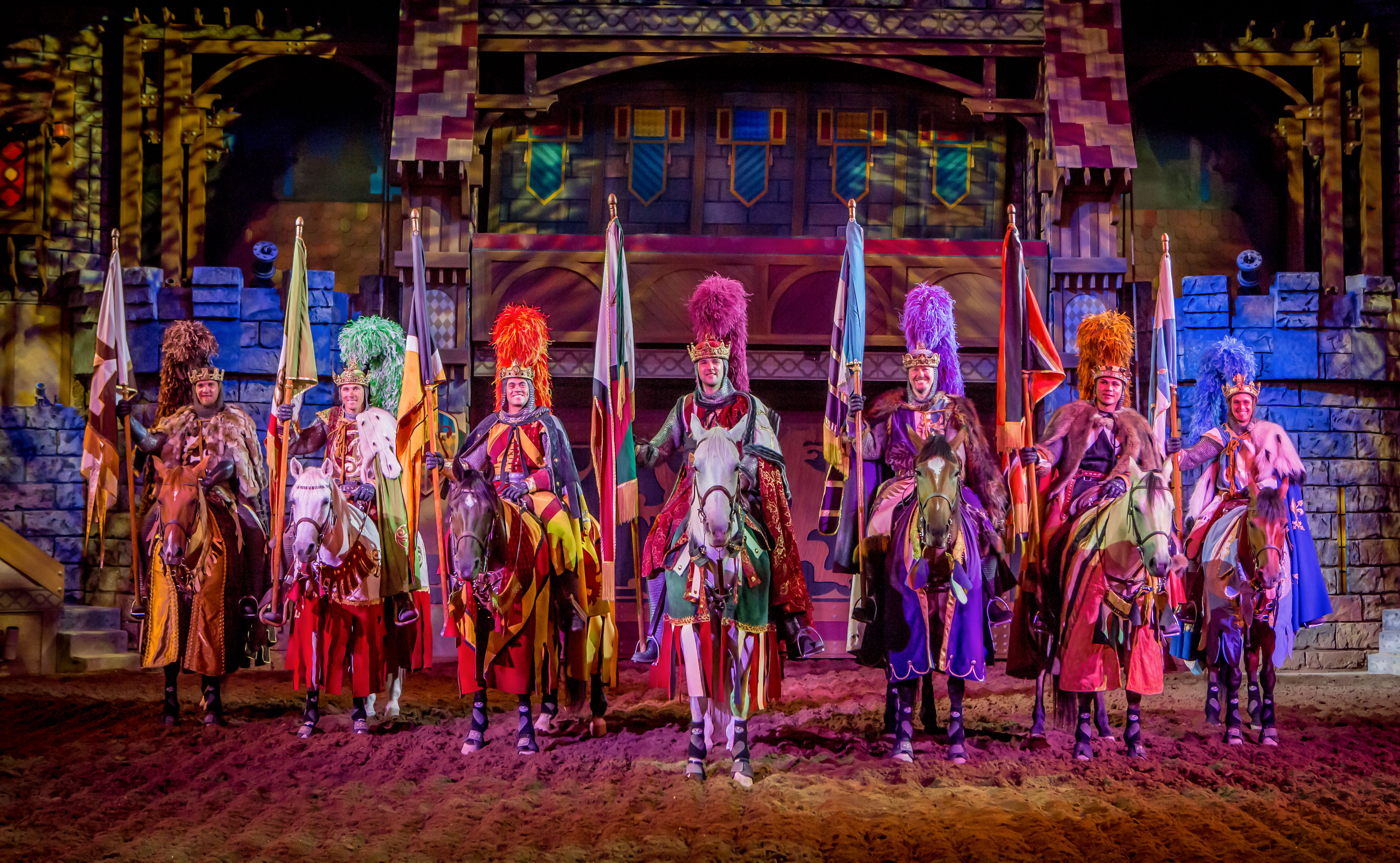 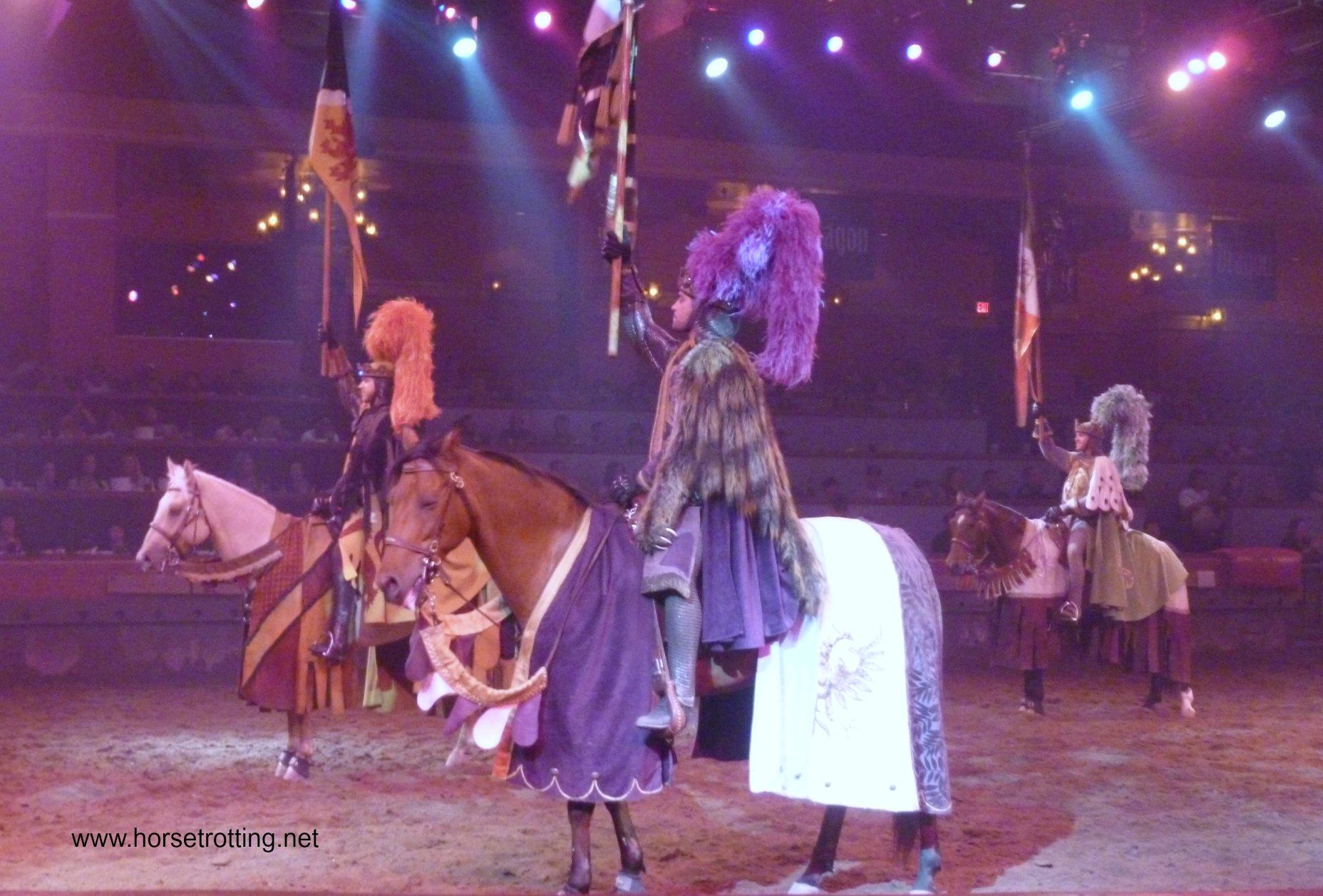 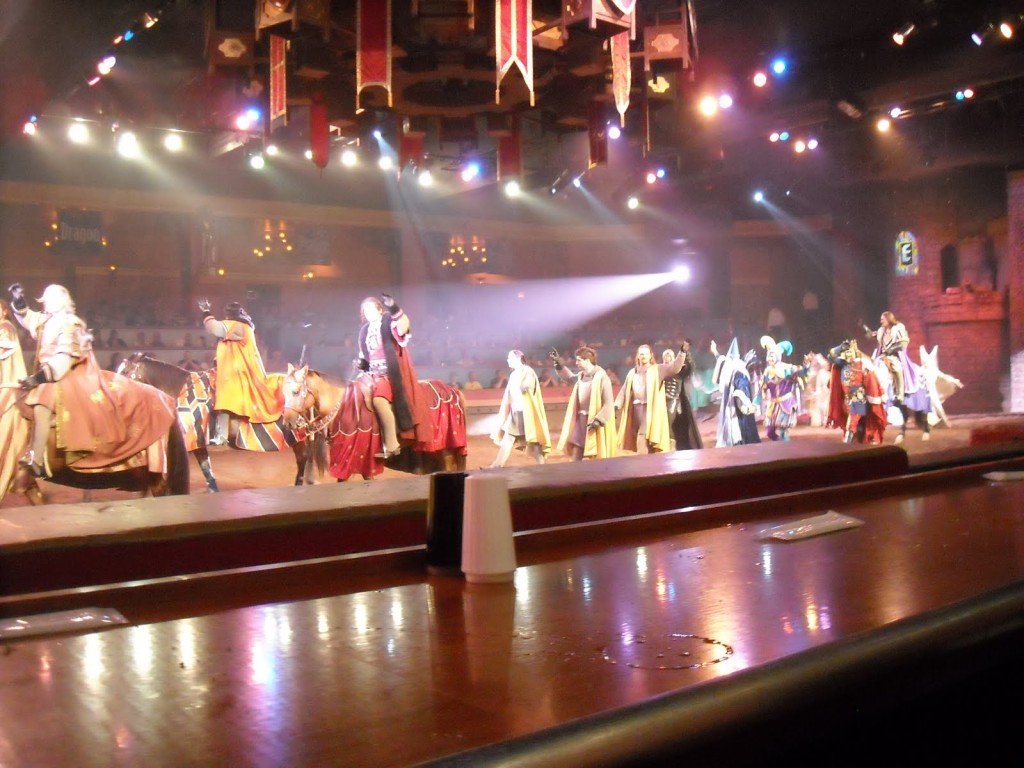 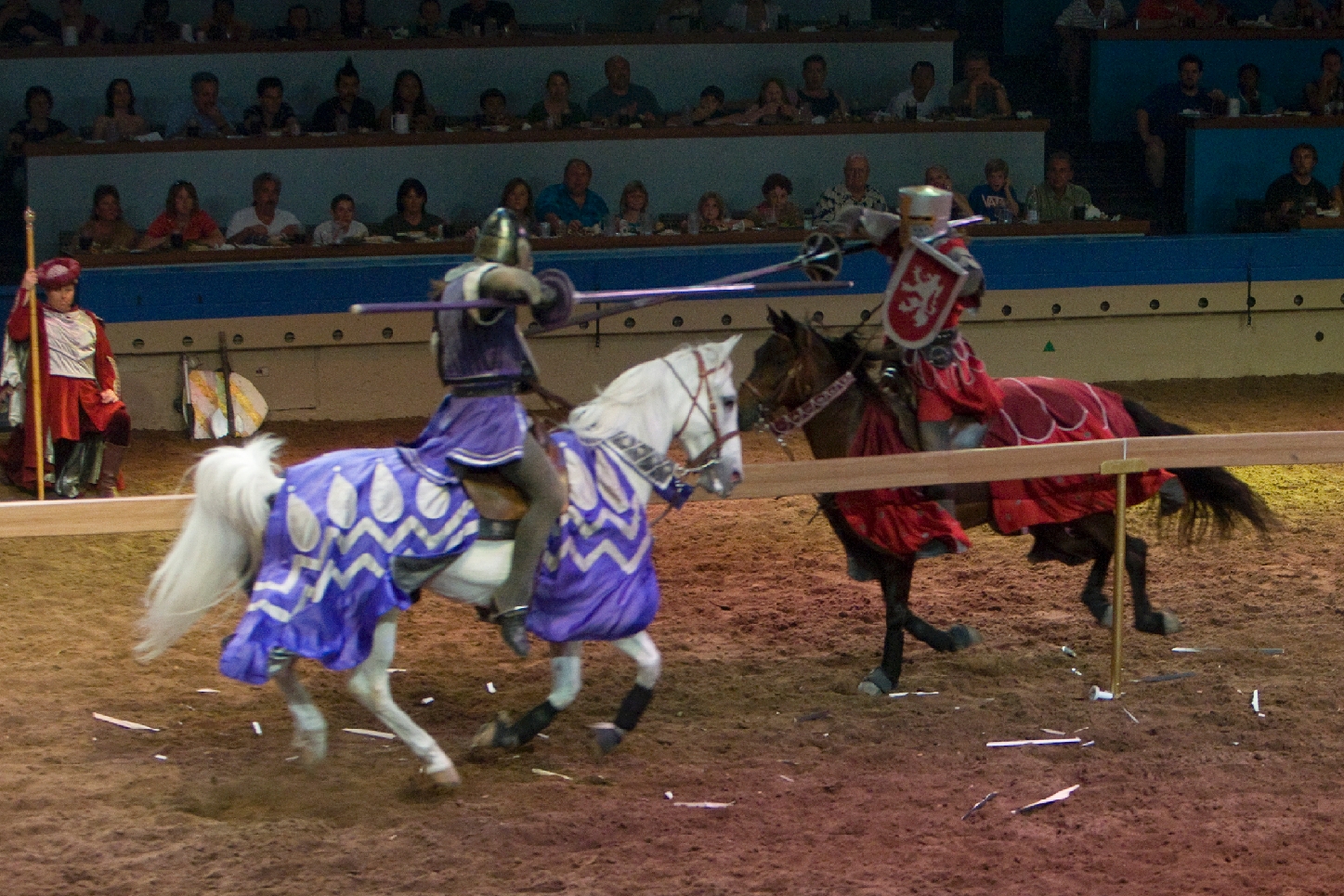 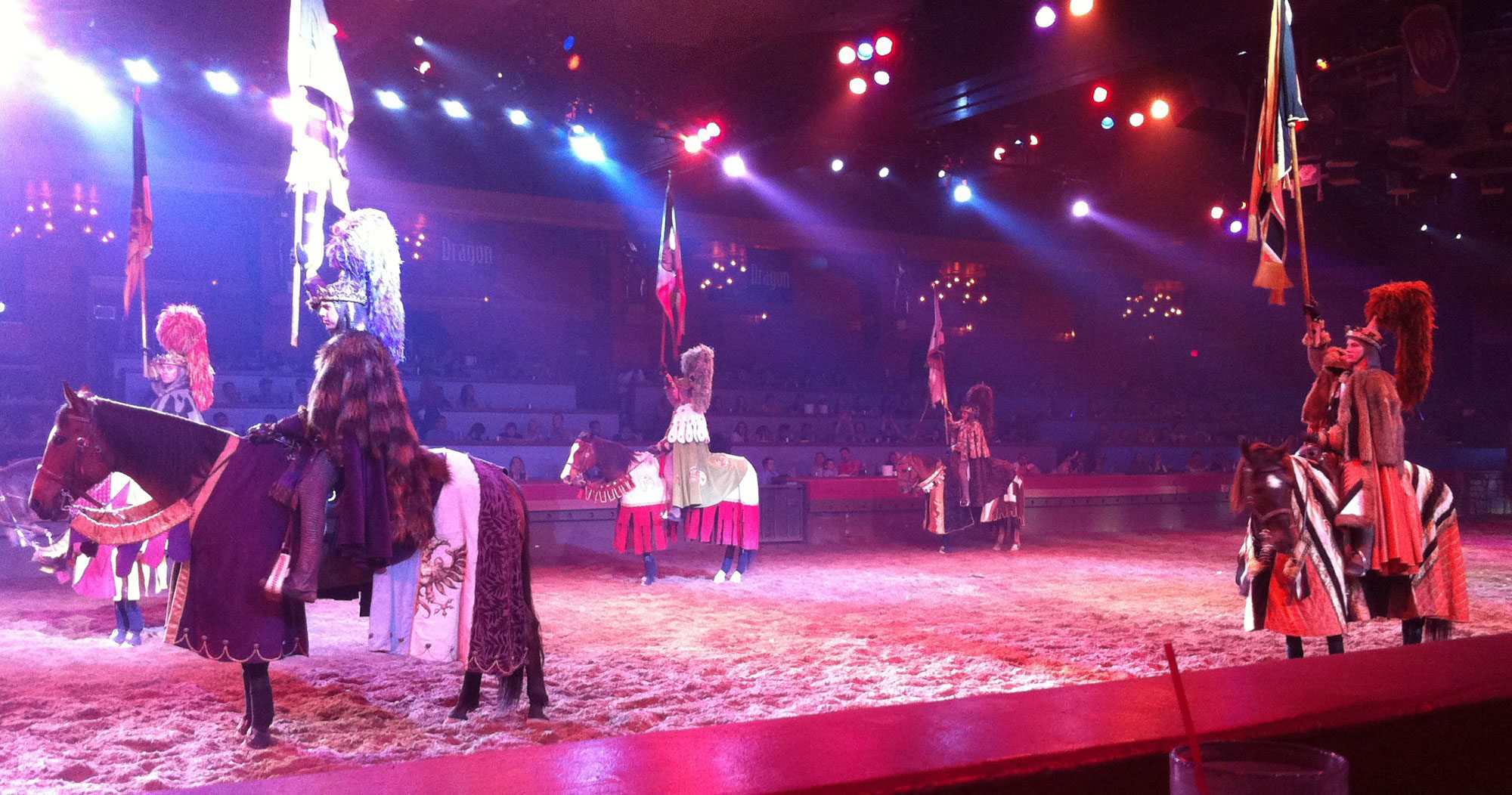 Tournament of the king

Tournament of the king is an action packed show in the entertainment capital of the world. Yvegas is offering lucrative discount on this wonderful show, so book your ticket and enjoy this spectacular show. Excalibur Hotel & Casino hotel is a perfect place for such show. The whole arrangement is appealing and eye-catching that leaves the audience spellbound. The highly interactive production is enjoyable for guests of all ages. Diners who are hungry for adventure will watch as armored knights joust on majestic horses, costumed maidens dance, fireworks explode, and much more!

Knighthood lies above eternity; it doesn’t live off fame, but rather deeds. Yes, it is a smash-hit show which delivers ultimate fun and shows the life of warriors during the medieval period. The show is a fun way to combine getting dinner with experiencing the excitement that ensures when knights in shining armor on horses duel to determine a champion.

Guests are seated in an arena-style setting with each section representing a different "country." Four-rows deep, the arena are divided into seven "country" sections and the "dark knight" section, which represents the evil Mordred's minions. During the show guests are encouraged to cheer on the king representing their section as the knights go head to head in various competitions including a horse race, jousting, sword fighting and gladiator-style battles.

Once seated, guests are served the first portion of their dinner, "dragon's blood" (hot tomato soup.) Just like what real lords and ladies would have experienced back in the Middle Ages, utensils are not provided, and patrons have to eat with their hands. Servers also come around during this time to fill drink orders. Along with soda and juice, an assortment of alcoholic beverages is available for purchase during the show.

Merlin and a court jester get the crowd going by introducing three cheering methods that actively engage everyone in the audience. After a hearty dose of merriment from Merlin and the jester a drum processional files into the arena to announce the entrance of King Arthur. Next, the other kings are announced, each blazing into the arena on a galloping horse.

The knights are dressed in costumes rich in color and design, and each of their horses is adorned with bright plumage. The costumers were designed by Michel Fresnay, who was nominated for a best-costume Emmy in 1989 for the television production of "Napoleon and Josephine."

During this time, dinner consisting of a roasted Cornish hen, steamed vegetables and a biscuit is served. While the audience dines, a large round table is lowered into the center of the arena where King Arthur and the other knights also partake in the feast, raising their glasses and toasting to the joyous occasion. Dessert is served afterwards and includes a sweet pastry.

After a song and dance number by the court maidens, the knights set aside their glasses and engage in some friendly competition to determine who the champion king is."If you want to win you must cheer," announces Merlin as he and the maidens encourage each section to root for their king.Audience members embrace the opportunity to be loud and cheer when the king representing their "country" is doing well or boo when he is losing the competition.

The competition is interrupted when evil Mordred’s, the fire wizard, appears and attempts to capture King Arthur's kingdom. The kings unite to try and defeat the dark knight in a series of action-packed battles. Fire, smoke, explosions and of course more cheering from the audience fill the arena. Swords clash and sparks fly as the battle between good and evil proceeds until finally one side is defeated.

Tournament of Kings Dinner & Show brings all the action from the medieval period that you've seen in movies and read about in history books right to your dinner table. Audiences of all ages can enjoy this raucous celebration.

by John M. FooteTournaments of the Kings