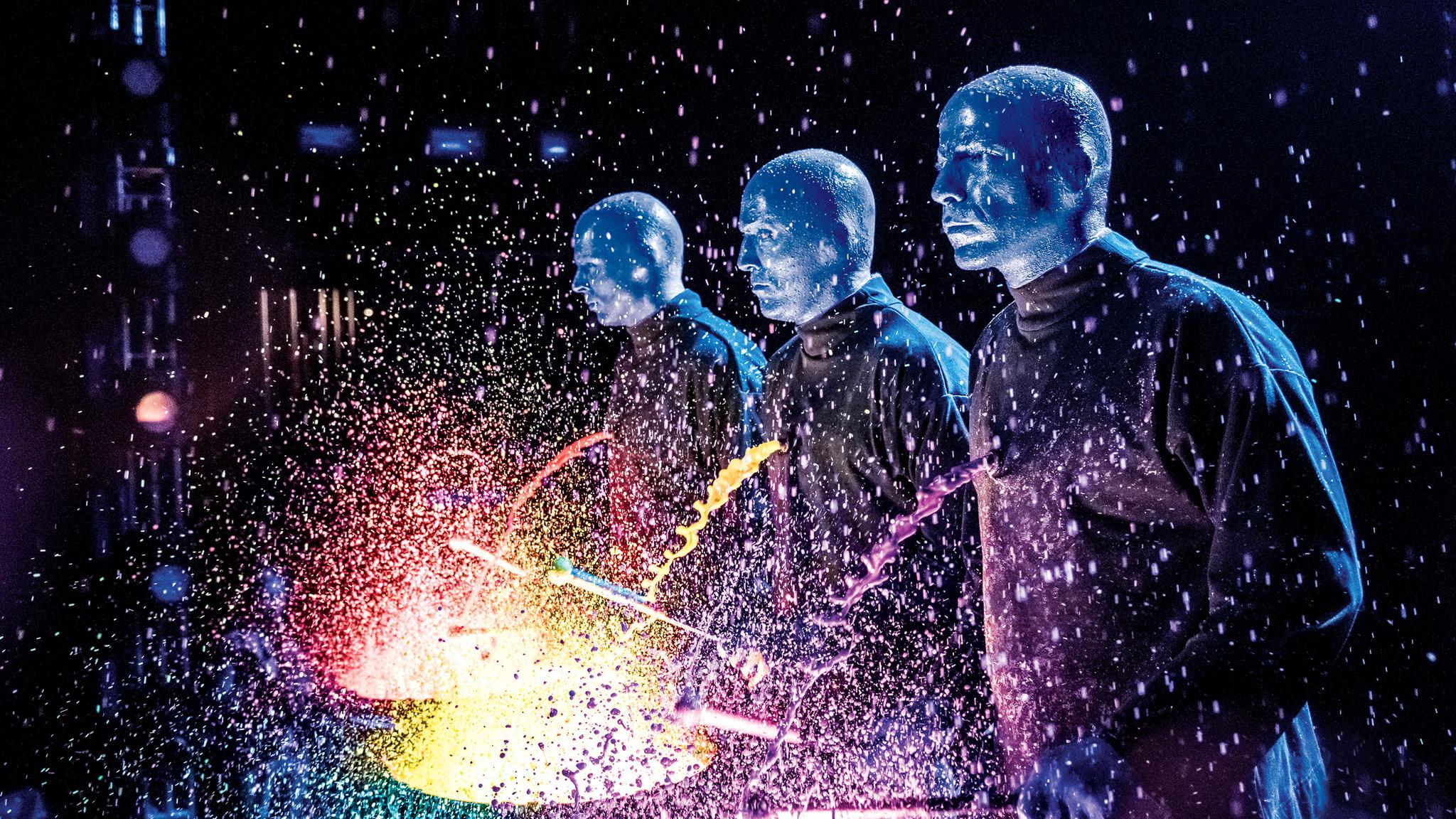 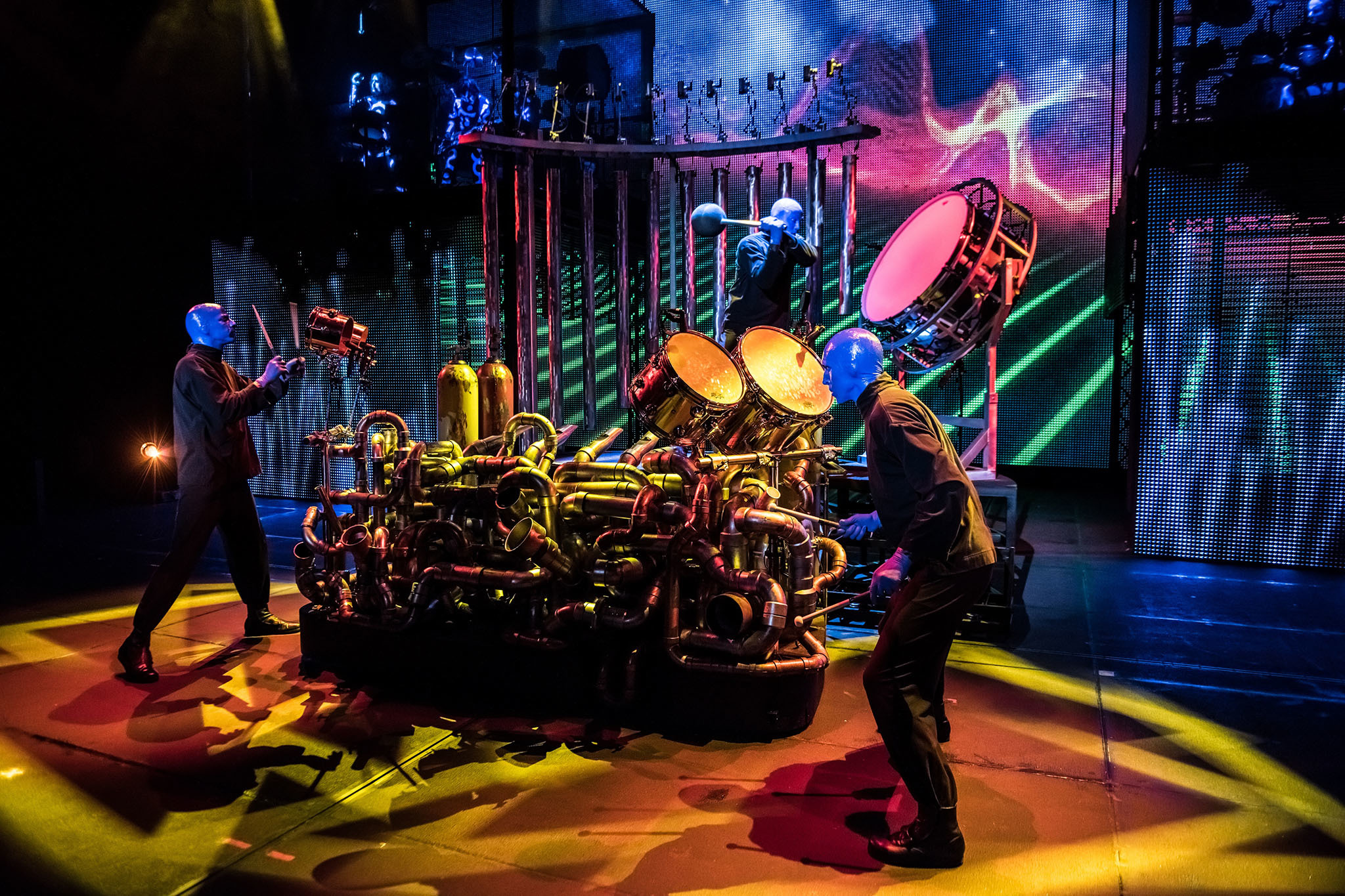 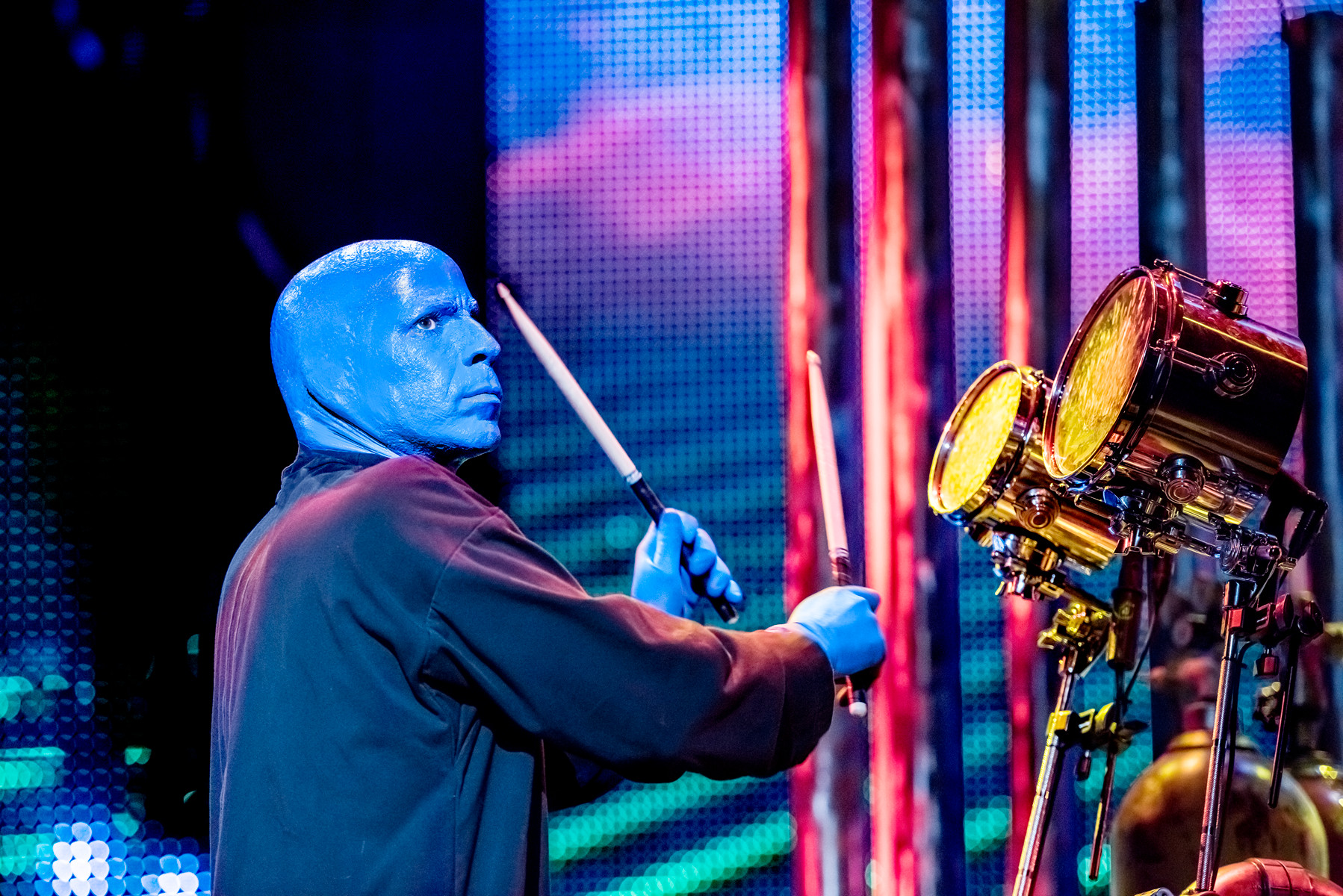 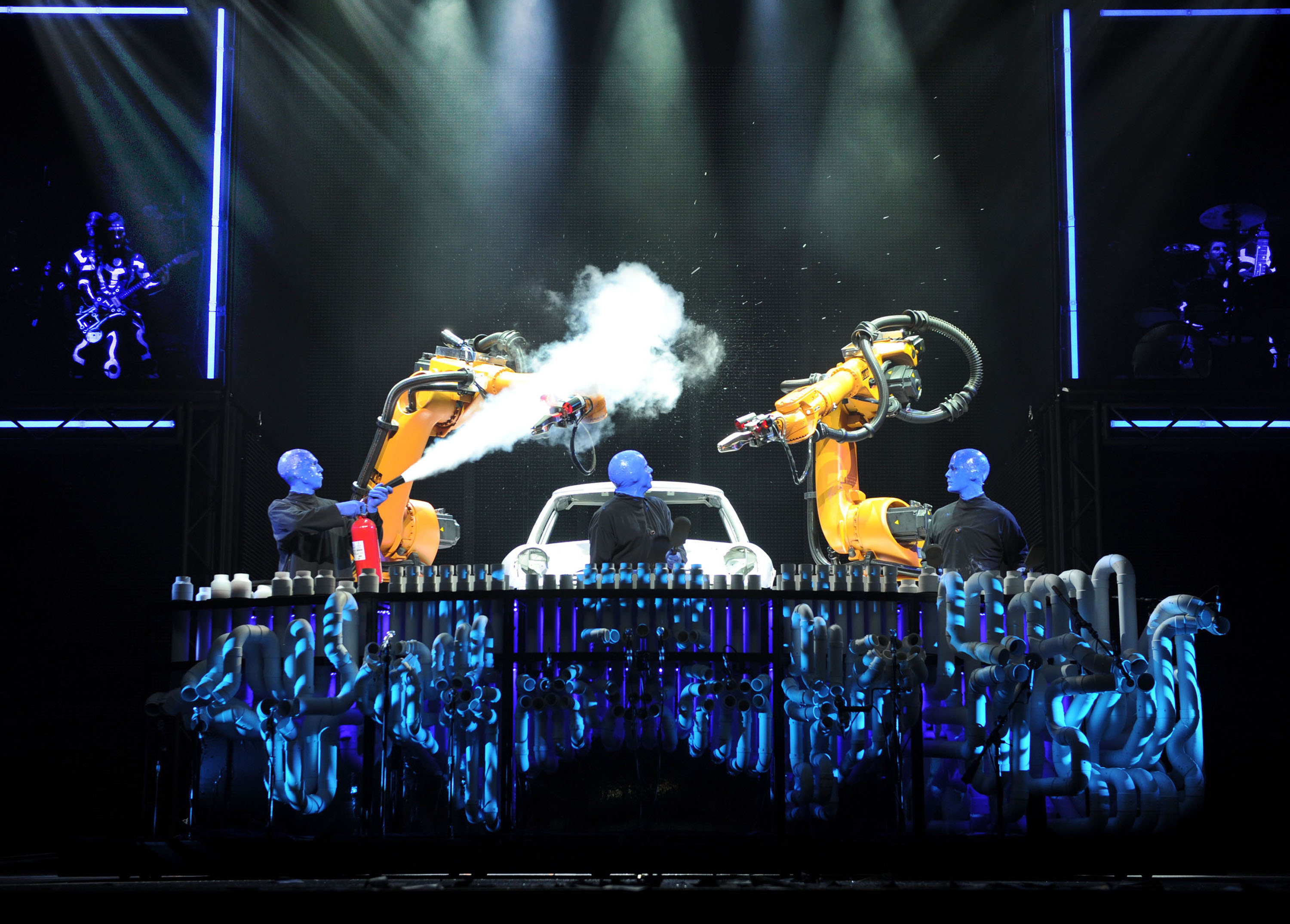 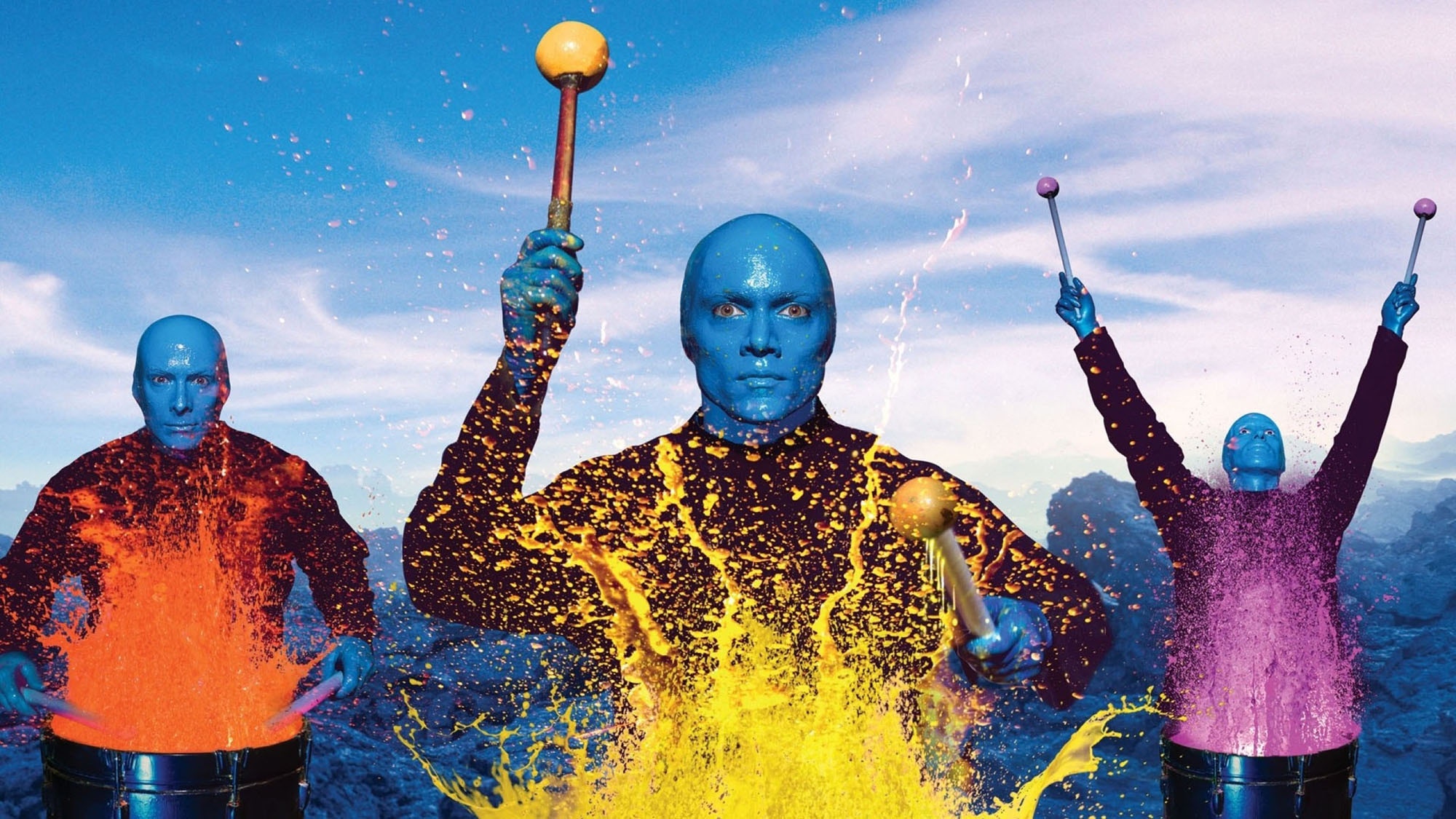 Blue Man Group Las Vegas made their Vegas debut at the Luxor Hotel and Casino in 2000 and they have been electrifying audiences ever since. The show is hard to classify. As I have explained in a few places on this website, I have placed it under the category of Magic Shows Las Vegas for lack of any better ideas. If there was an Avant-Garde Production with Percussion and Extreme Lighting Effects and some Comedy and Amusing Antics Thrown In category, I would have placed the show there.

Basically the show consists of three bald blue dudes running around the stage doing interesting things. Sometimes they throw paint around, creating gorgeous effects and surprisingly stunning pictures. There is even a modern art piece, where they take a member from the audience, hang him by his feet, cover him with paint (and a plastic protector to protect his clothing, of course), and drop him onto a canvas for a body print. That would be quite a souvenir to leave with a Blue Man Group original that is an imprint of your upside down body!

My favorite display is the pipes. Blue Man Group Las Vegas creates a stunning beautiful display about connectedness. They explain with words on a television screen that there is something that connects us all. Then the series of pipes shows in bright and electric colors and that one thing that connects us all. Do you know what it is? It is sewage!

But that is not all that the Blue Man Group does with pipes. This clip is what you can expect from Vegas show. Very clever!

Blue Man Group began in 1987, founded by Chris Wink, Matt Goldman and Phil Stanton. Wink and Goldman were junior high school friends in Manhattan. The two lost touch but reunited during their college years in 1984. In 1986, the two met Stanton, and soon Blue Man Group was playing in Central Park and whatever other shows they could book.

In the early days, the Blue Man Group members would speak with the audience after the show, still in dressed in full costume. However, now, the members stay in character at all times while in costume. Character means no speaking. And if someone asks for an autograph, an autograph to the members of Blue Man Group means a smudge of blue paint. When someone whips out a cell phone or a digital camera for a photograph, the blue men simply stare, as if confused and amazed. They remain in character at all times.

Are the Blue Man Group demons?
Only two of them.

Hahaha. You know the group is getting famous when references are made on national television. The quote above was from the show Angel.

Blue Man Group Las Vegas has moved around to several locations over the years, including spotlights at the Luxor and Venetian. They currently perform a Monte Carlo at 7:00 p.m. daily, with additional shows at 4:00 and 9:30 p.m. on select dates. She show is approximately 105 minutes long.

This show will make you laugh and will make you think. It’s inspiring, captivating, and definitely amusing. I highly recommend the three blue men in Blue Man Group Las Vegas.

Blue Man Group Las Vegas have been electrifying audiences ever since. The show is hard to classify. Nice show ever watched.